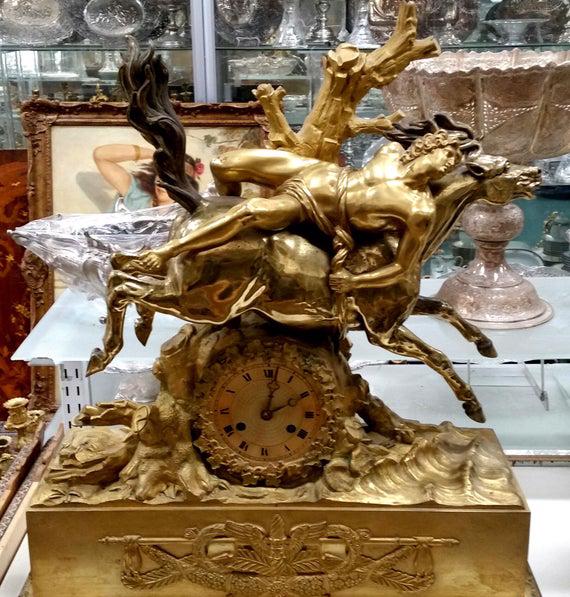 19th C Clock Alexander the GREAT and Bucephalus Museum Quality This absolutely stunning gilt bronze sculpture of Alexander and his loyal horse Bucephalus that conquered distant lands and built an Empire, will add dramatic flair to your decor. This sculpure shows Bucephalus carrying Alexander, in what seems to be a rescue in full stride or this could be Alexander showing his masterful technique of riding Bucephalus after taming him. ALL SALES ARE FINAL. Please study the photos carefully and ask as many questions as possible before buying. We can provide more photos if necessary. Thanks and enjoy! Excerpt from Wikipedia states the following: Plutarch says in 344 BC, at twelve or thirteen years of age, Alexander of Macedonia won the horse by making a wager with his father. A horse dealer named Philonicus the Thessalian offered Bucephalus to King Philip II for the remarkably high sum of 13 talents. Because no one could tame the animal, Philip was not interested. However, Alexander was, and he offered to pay himself should he fail. Alexander was given a chance and surprised all by subduing it. He spoke soothingly to the horse and turned it toward the sun so that it could no longer see its own shadow, which had been the cause of its distress. Dropping his fluttering cloak as well, Alexander successfully tamed the horse. Plutarch says that the incident so impressed Philip that he told the boy, "O my son, look thee out a kingdom equal to and worthy of thyself, for Macedonia is too little for thee." As one of his chargers, Bucephalus served Alexander in numerous battles. The value which Alexander placed on Bucephalus emulated his hero and supposed ancestor Achilles, who claimed that his horses were "known to excel all others—for they are immortal. Poseidon gave them to my father Peleus, who in his turn gave them to me." The legend of Bucephalus grew in association with that of Alexander, beginning with the fiction that they were born simultaneously: some of the later versions of the Alexander Romance also synchronized the hour of their death. The pair forged a sort of cult in that, after them, it was all but expected of a conqueror that he have a favourite horse. Julius Caesar had one; so too did the eccentric Roman Emperor Caligula, who made a great fuss of his horse Incitatus, holding birthday parties for him, riding him while adorned with Alexander's breastplate, and planning to make him a consul. Its time for you to make your mansion great again by adding this great Masterpiece of Alexander the Great and Bucephalus into your collection. An inspiring story is told every time you look in admiration at this great clock sculpture. Your victory trophy awaits!