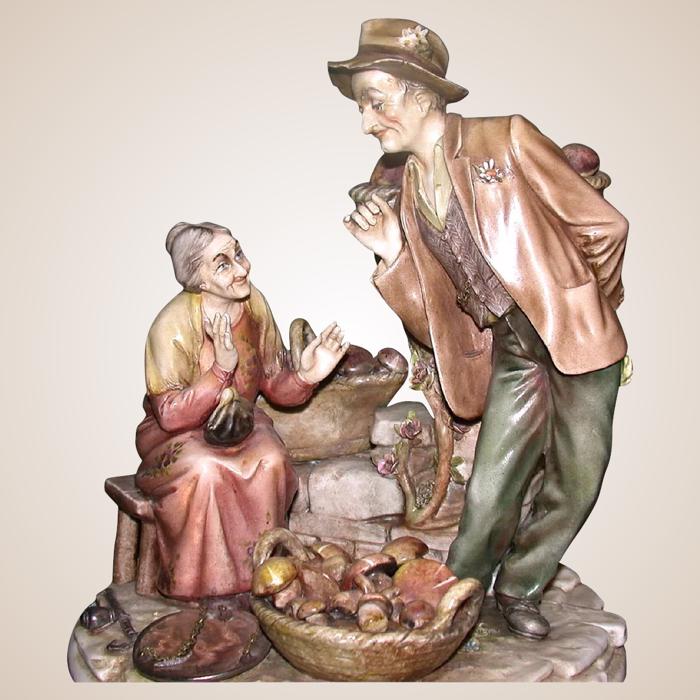 This marvelous genre piece by Antonio Borsato was introduced into the United States in 1979, when it was priced at $1,650.00. Hard to beli...

This marvelous genre piece by Antonio Borsato was introduced into the United States in 1979, when it was priced at $1,650.00. Hard to believe we offer this piece at less than its initial price was in 1979! The realism and humanity of this piece is incredible. Look at the details of the figures, and the expressions. It is almost as if one were watching a real life scene. As with all Borsato's creations, it is sculpted completely in the round, with the most amazing details. Spend some time looking at my photographs; see the nuances of expression; the careful depiction of character and age. This particular piece is also notable for its Very Good to Excellent Condition, with no cracks or losses, something becoming much more scarce nowadays! Borsato porcelain sculptures are considered the cream of Capodimonte porcelain. The book Capodimonte Collectibles, published in 1990, presents a fascinating history of Capodimonte porcelain, and clearly indicates that some 20th Century artists were included in the term "Capodimonte." Antonio Borsato is featured over and over again as a prime example. His work is pictured on Pages 53, 58, 63, 64, 117, 118, 134, 139, and 153. His trademark (artist's palette) is also shown. This large and complete book outlines the original history, and the various trademarks used for this umbrella term; from unmarked pieces, to a fleur-di-lis in a circle, to the crown with the N, to more modern marks which this book includes the Borsato trademark. The world lost a great artist when Antonio Borsato was killed in an auto accident in 1982. Borsato worked endlessly to make each creation a melody of color and movement. Borsato originals are sculptured in the full-round with no blank surfaces, with the entire piece completely hand colored with brilliant artistry. All stages were attended to by Antonio Borsato himself. It is assuring to note that no Borsato was in mass production. Borsato is known as the Michelangelo of the 20th Century. His works are displayed in the Vatican, museums, and many significant private collections. He studied under the great Cacciapuoti early on, but many believe he far surpassed his mentor, becoming the greatest of the Capo-Di-Monte genre. Borsato works of art are irreplaceable just as are the works of other Old Masters. His impeccable faithful adherence to detail, a wisp of hair, facial expression, even eyelashes, gestures, whimsical humor, anatomical perfection, combine to endow each of Borsato's works with breathing realism. Each Borsato art treasure is an exquisite masterpiece to be cherished as an heirloom for future generations.All our items are available on layaway with NO Interest Charges! ITEM IDA4211ITEM TYPEVintageTYPEPotteryCREATORCapodimonte