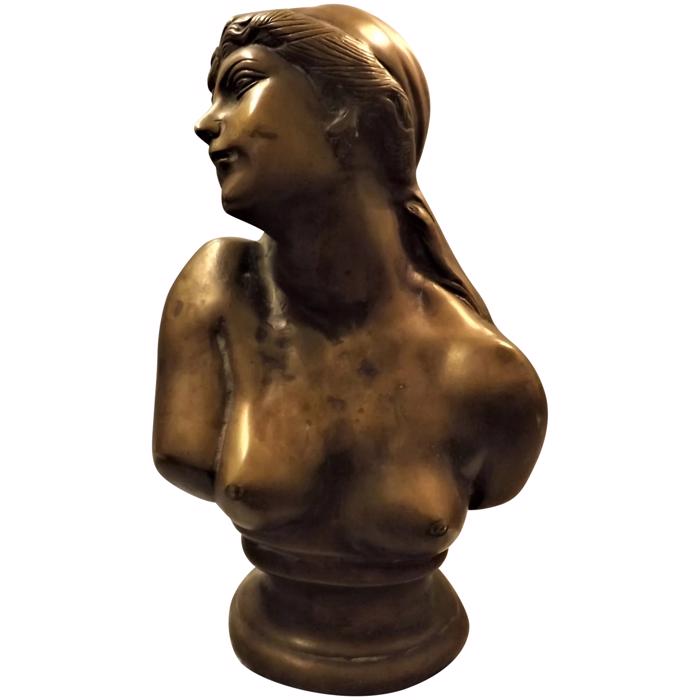 A rather gorgeous large Neoclassical Bronze Bust which we date as around 1820 - 1830. The casting of this piece is excellent...great defi...

A rather gorgeous large Neoclassical Bronze Bust which we date as around 1820 - 1830. The casting of this piece is excellent...great definition and a beautifully executed attractive face. This is a large and heavy piece with a weight of 3 .5 kilos or around 7 3/4 lbs..... she stands ten inches in height with a width across the arms of six inches. Made using the Lost Wax Method....there is no signature that we can find on this piece. Georgian style, the various styles in the architecture, interior design, and decorative arts of Britain during the reigns of the first four members of the house of Hanover, between the accession of George I in 1714 and the death of George IV in 1830. There was such diversification and oscillation in artistic style during this period that it is perhaps more accurate to speak of “Georgian styles.” The second important Georgian architectural style, Neoclassicism, came into fashion about the mid-18th century. The models for the architecture of this period were no longer the buildings of the Italian Renaissance but those of Classical Greece and Rome. Neoclassicism’s austere use of Doric and Ionic architectural elements increasingly dominated English architecture in the late 18th century. Toward the end of the century and during the reign of George IV, a number of other styles of building and interior decoration became popular, chief among them Gothic Revival and the Regency style.. In addition to architecture and interior design, the Georgian era saw great achievements in the decorative arts. Technical as well as aesthetic advances were made in pottery by Josiah Wedgwood and Josiah Spode. Paul de Lamerie, working primarily in the Rococo style, was preeminent among English silversmiths of the early to mid-18th century, after which the Neoclassical designs of the Adam family dominated this craft. Furniture design encompassed a variety of distinct and memorable styles, ranging from the complicated curves of pieces by Thomas Chippendale (mid-18th century), to the classical influence of the Adams, to the straight, simple lines of the works of George Hepplewhite and Thomas Sheraton. It was also during the Georgian era that wallpaper came to supplant wood paneling as the preferred method of covering interior walls. The Georgian era is notably remembered as marking the summit of house design in Britain. Its legacy can be seen in the entire city squares of uniform, symmetrical townhouses in London, their facades employing classical pilasters, pedimented doors and windows, and graceful moldings. These houses’ interiors—with harmonious proportions, quiet colours, Roman-derived stucco ornamentation, and Chippendale and Sheraton furniture—once made elegant settings for the paintings of Reynolds and Gainsborough that adorned the walls. ITEM ID14387ITEM TYPEAntiqueCOLORBronze